In 2022 I quit my PhD program at MIT, left academia for science journalism, moved across the world. Making these big changes was the right call—but not an easy one. The corrosive perfectionism and self-loathing that has haunted me since high school kept me paralyzed for years, unable to sacrifice “achievement” for a life that would serve me better. I knew that science wasn’t going to make me happy, but I stuck with it just because I couldn’t think of quitting as anything but a failure.

Yeah, really. I learned German. There’s still a lot I need to work on, but really did start getting better from there. The progress wasn’t quick, but it was real.

That’s clearly an absurd question. And that’s exactly the point.

Learn a language, rein in perfectionism, and live a bit more intentionally

This blog will help you learn a language, especially if you’re self-taught.

I’m here to prove that you don’t need some kind of perfect study method or perfectly organized notebooks or perfect whatever to learn a language. You don’t need talent either. You just need time. All it took to get monolingual me speaking fluent German turned out to be Duolingo, my mom’s Netflix password, Spotify, a few years, and a dash of stubbornness.

So if you’re looking for inspirational language-learning notebooks, look elsewhere. My notebooks look like garbage.

What I can’t offer in beautifully organized bookshelves and calligraphed study sheets, I can offer in hard facts. I’m a science journalist and ex-scientist, and I make a point of looking into the research behind popular language learning trends and truisms to help you know what’s legit and what you can safely ignore.

But beyond that, this blog has a higher purpose: helping you to rein in perfectionism and live a more intentional, fulfilling life. Language learning happens to be an especially potent anti-perfectionism tonic, but I write about other steps I’ve made towards living more in line with my values and less in the shadow of my perfectionism, too. These include quitting my PhD and leaving academia (long story short: I’m still alive), starting a new career, and moving abroad.

So wait, who is this blog for, exactly?

Language learners and recovering perfectionists, mainly. If any of this sounds like you, you’re in the right place:

But why “Monoglot Anxiety?”

“Monoglot Anxiety” originally referred to my complex surrounding learning languages. Being monolingual always bugged me—I distinctly remember casting preteen-grade envious glares at a trilingual friend in middle school as she chatted with her family in French, English, and German—but I was so self-conscious about making mistakes that I would never use any of the languages I learned in school and I inevitably forgot them. Screwing up was guaranteed, I’d never sound like a native speaker, so why try? Isn’t it better to be monolingual than to speak a second language badly? 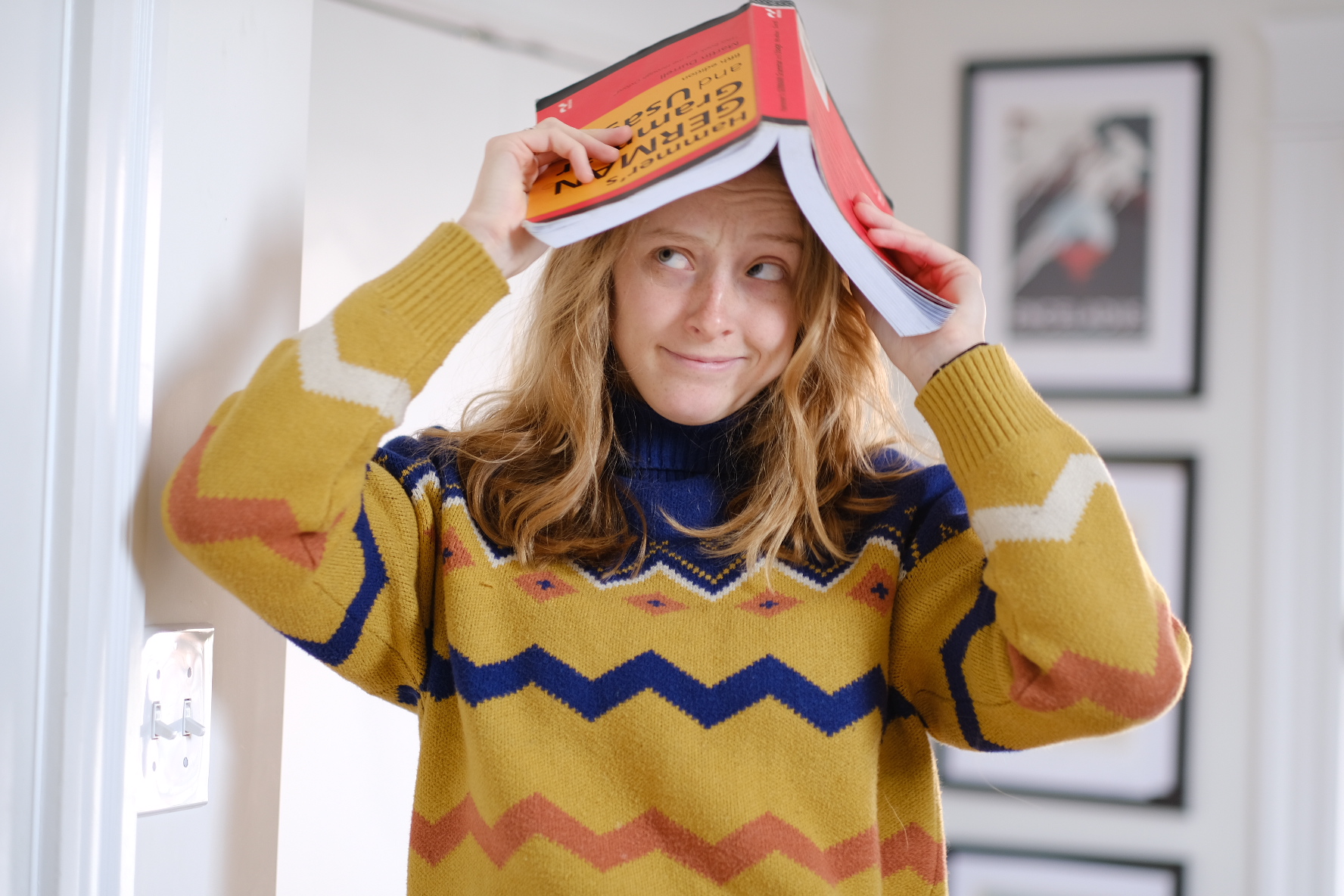 I bought this grammar book before I realized that I could just watch TV in German and learn languages just as fast. It still makes a good hat, at least.

I was only able to achieve fluency in my first foreign language, German, after I got over my monoglot anxiety. I started to think of language learning as a nice way to pass time rather than a chance to prove I was “smart” or “cultured” or whatever, and two years later I could speak German. This was the first of many mindset shifts—many sparked by my experiences learning languages and living abroad—that I’ve made on my ongoing journey away from the anxious perfectionism I developed in academia and towards a more intentional life of worrying less, accepting imperfection, and just living.

Learning a new language is a great way to get to grips with imperfection and learn healthier mindsets that will carry into the rest of your life. That’s as true for monoglots as it is for polyglots — we’re all works in progress!

You’ve probably heard that “immersion” is a good way to learn a language — and it is. I learned German pretty much entirely through brute-force immersion! But finding good content to immerse yourself in can be hard at first.

Like what you see? Head over to the Buy Me a Coffee page. I post little updates there to let you know what I’m working on. From there, you can also sign up to support the site monthly or send a one-time donation of a singular coffee. Money from supporters pays for the site’s running costs.

I’m a freelance science journalist covering the Earth and life sciences, but I try to keep the specifics of my work mostly separate from this blog since separating my personal identity from my professional one was a hard-won gain for me. But if you’re interested in my writing (and my writing about writing), you can find my personal website and portfolio at www.elisecutts.com.

I’m also happy to chat with new science writers and pay forward the generous mentorship that I received when I first got started. If “new science writer” sounds like you, shoot me an email at hello@monoglotanxiety.com to introduce yourself. I’ll help however I can.