If you're cramming, you're doing it wrong 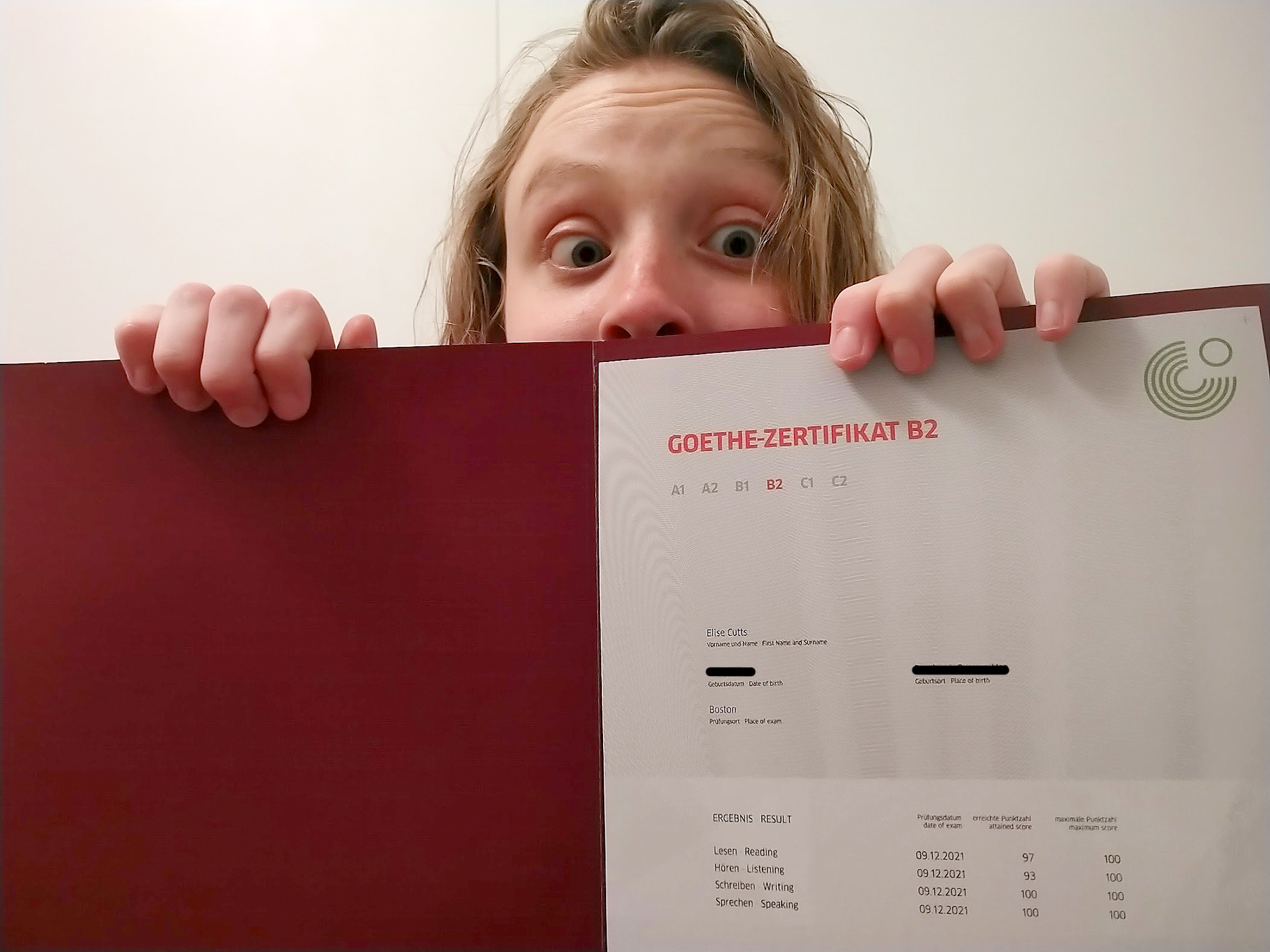 Anyways, as a newly minted official Goethe Institute certified B2 German speaker, I wanted to stop and share how I prepped for the test—and really, how I didn’t prep for the test.

I’ve seen a lot of advice out there for test-takers that I fundamentally disagree with. As always, it seems the consensus is that you need to execute some kind of hardcore bootcamp to do well on the B2 Goethe exam.

And that’s really just a big load of crap, because I barely “studied” and still earned a nearly perfect score.

Cramming isn’t the way. Period. If you’re actually a B2 German speaker, you shouldn’t need to cram. And you can become a B2 German speaker without doing anything much more complicated than watching a bunch of TV and talking to people once in a while.

99.9999% of all of the work that goes into your exam grade should come before you even sign up for the exam. No amount of cramming can make you B2 in a month. For me, it took 2 years of self-study to reach B2. And it’s those 2 years—not the 2 weeks of prep I did for the exam—that earned me great scores.

Netflix, Spotify, and Duolingo will get you pretty far

I overwhelmingly relied on comprehensible input to learn German. This sounds fancy, but in practice it meant watching loads of TV and listening to an unholy number of podcasts. Shout out to my mom for letting me leech off of her Netflix account all these years. You rock, Teri.

Now, I jumped into German watching a lot of n+1000 content (looking at you, Dark on Netflix). But even if you’re stupid like me and refuse to use beginner resources you can still brute-force immersion yourself to fluency.

For the first year, I relied exclusively on Duolingo (to learn basic vocabulary) and comprehensible input (Netflix, YouTube, and podcasts on Spotify) to learn German.

Find penpals and speaking partners once you can communicate a bit

About a year in, when I hit something around a B1 level, I started trying to communicate with people. In practice, this meant chatting with an iTalki tutor about once every two weeks and writing to penpals. More recently, I found speaking partners to chat with occasionally via text and Skype.

I use Slowly to find and write to penpals.

I use HelloTalk and MyLanguageExchange.com to find speaking partners.

I tested at my real level, not my reach level

Take the exam at your real level, not your reach level. If you’re testing at the right level, you won’t need to prep much.

I leafed through a C1 practice test, and I’m pretty sure that I could have passed C1—with some serious prep. But why force it? I’m not a C1 speaker yet, even if I could fake it for an exam. I’ll pass C1 when I’m at C1.

And if aren’t a B2 speaker yet but need the B2 certificate for something—like studying at a German university—maybe ask yourself if you’re really ready for whatever you need that certificate for. There’s no shame in waiting until you’re ready to go for B2.

Seriously, chill out. You do not need some kind of crazy 2-month study plan to prep for this test.

I got a perfect score in speaking and writing, a 97% in reading, and a 93% in listening after a few weeks of relaxed exam prep. And I mean relaxed. I didn’t spend more than 8 hours prepping over 2 weeks.

One of the girls taking the test with me told me a bit about the pre-exam study routines of YouTubers she followed and I just sat there blinking, nonplussed. People seriously do a practice exam a day for a month? Drill conjugations and vocabulary every day for two months? If that’s what it’ll take to pass, why are you even taking the exam?

Don’t fake it, make it. Take the exam you’re ready for and you won’t need to cram. Cramming doesn’t teach you anything long-term, it just inflates your level short-term.

I spent a few weeks learning how to take the test

Those 8 hours of prep were not devoted to learning new vocabulary or drilling grammar. I used them to learn how to take the test. The B2 Goethe exam is in B2 German, but it doesn’t test you on B2 German. It tests how well you can take the Goethe B2 German exam. So don’t prep your German, prep your test-taking.

Especially for the speaking and writing sections, knowing what the graders will evaluate you on is critical. You could speak perfectly fluently and flunk just because your speech didn’t include a clear “beginning, middle, and end” as required.

The B2 Goethe exam is in B2 German, but it doesn’t test you on B2 German. It tests how well you can take the test. So don’t prep your German, prep your test-taking.

The good news is, you don’t need much time to learn the tasks the test will ask you to complete. A week or two is more than enough.

I practiced the reading module once

I know that I know how to read in German, so I only practiced the reading module one time. The point wasn’t to practice reading, the point was to get familiar with the kinds of questions the test asks. Basically: waste time reading the reading module instructions before the exam, not during the exam.

If you can read the news in German (which you should be able to do if you’re B2), one practice test to get familiar with exam format is more than enough prep for the reading module.

I practiced the writing module a few times

High school essay transitions: the only phrases worth memorizing

I’m against memorization. But you can easily be B2 and not know the stilted transition phrases that exam graders like to see in writing samples and speeches (gotta have that sweet, sweet “structure”). Having a few of these in your back pocket before the test will take off a bit of stress:

Meiner Meinung nach… (in my opinion … )

Ich bin anderer Meinung (I have a different opinion)

Ich möchte über … sprechen (I’d like to speak about … )

Danke für Ihre Aufmerksamkeit (Thank you for your attention)

I recommend practicing these unnatural exercises a few times so they don’t trip you up. And remember to write by hand. When is the last time you wrote hundreds of words by hand? On paper? In ink? Do you even know what a 100-word chunk of your own handwriting looks like?

I practiced the speaking module a few times

If I asked you to deliver a 4-minute speech on say, “living in old age” or “sustainable tourism” in your native language right now, could you do it? Would it have a clear beginning, middle, and end? Structured arguments? A list of possibilities with pros and cons for each, and one possibility described in more detail?

No? Yeah, me neither. But that’s exactly what you’ll be asked to do for the Goethe B2 speaking module.

The other task is a bit less awkward — it’s a 5-minute discussion with another test taker based on a prompt. Having a conversation feels a lot more natural than giving a speech.

What about the listening module?

That was a mistake. I still did well, but my 93% in listening was my lowest score. The listening exercises were really unnatural for me since I’m used to listening to full conversations and not 1-3 contextless sentences floating in the void. Don’t be like me — download that audio file and do the listening module once to get used to it, just like the reading module.

I practiced using the formal-you (Sie)

So, I never siezen (use the formal-you for) anybody. I’m self-taught and only ever speak to my boyfriend’s family, speaking partners, and tutors around my age. So going into the test, I knew that remembering to use Sie would potentially trip me up on the exam.

To practice, I chatted a bit with my boyfriend and my German tutor using Sie in the week before the test.

Of course, I still messed this up on my exam. But the test proctors didn’t seem to mind — I scored 100% in speaking. Which brings me to my next point…

Surprised? I was too. But I looked at the grading rubrics for the exam and realized that a 60% was enough to pass each module. Keeping that in mind helped me keep calm — and keep paralyzing perfectionism at bay.

For the speaking and writing modules, the best possible score you can achieve still allows for occasional mistakes that don’t interfere with understanding. For the 30-question multiple-choice reading and listening sections, you can miss 10 questions and still pass.

That’s a lot of leeway. Don’t freak out if you don’t know an answer, it’s fine. Mistakes are allowed, even for perfect scores. Check out the grading rubric to see for yourself.

Speaking mistakes are a chance to show off your German

And on a related note—if you screw up speaking, your mistake can actually be a chance to guide the conversation towards topics you’re more confident speaking about.

My speaking partner was high school student, so I went into the conversation 100% expecting to duzen her. But she spoke first and addressed me with Sie, so it would have technically be impolite for me to duzen her back. Needless to say, I slipped up and duzen-ed her multiple times.

After my first slip-up, I stopped in my tracks and turned to the proctors to explain that I’ve rarely had to siezen anyone since I mostly speak German with my boyfriend’s family, and that I especially wasn’t used to siezen-ing folks my age since I’m self-taught.

Explaining my mistake was a chance to speak fluently about something I was used to talking about—in my case, my boyfriend’s family and teaching myself German.

So, prepare a few stock explanations for mistakes you’re likely to make. Screw up a word’s gender? Explain that you heard it in a YouTube video and never learned its gender. Don’t know the translation of “House of Representatives?” Sorry, you mostly listen to German podcasts about science or art, not US politics. The topic selection was unlucky. Siezen where you should duzen? Whoops, you were just trying to be polite.

The takeaway: you don’t need to study hard to pass the B2 German exam

If you read my blog or follow me on Twitter, you know what’s coming next: you don’t need some kind of perfectly planned, perfectly executed study plan to ace the B2 German test. A few years of (lots and lots of) comprehensible input supplemented with a bit of speaking and writing practice once you can communicate reasonably well and a week or two of prepping for the exam itself before the test will get you there.

So don’t stress. Just head over to Netflix and watch another episode of Dark. Or whatever you like watching. That’ll help you far more than any hardcore cram-session. 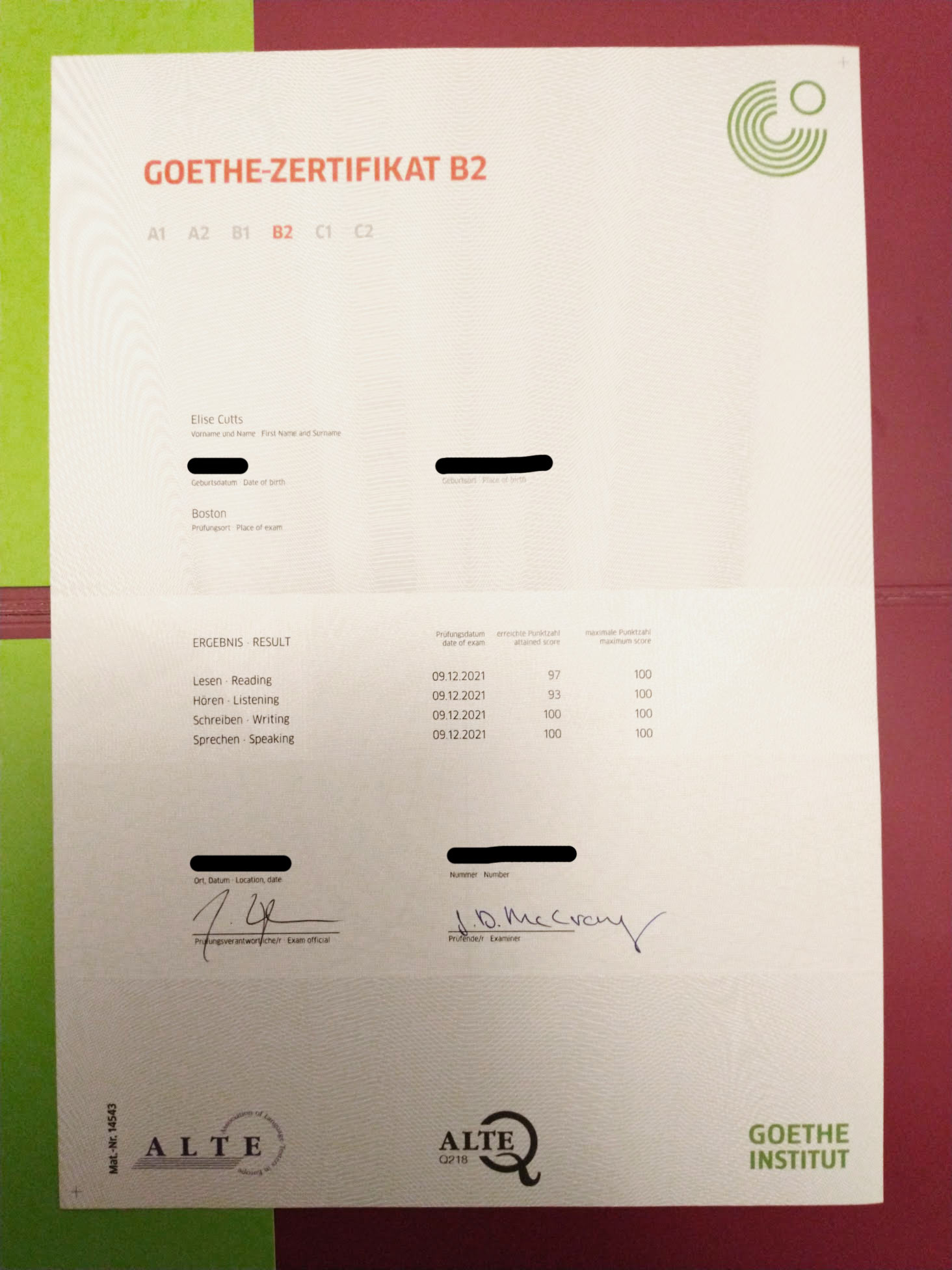 In 2022 I quit my PhD program at MIT, left academia for science journalism, …