I finally found a way to track my language learning time consistently. Here's a first look at the data

This blog is all about embracing chaos and imperfection so I think it’s completely in character that I try, yet again, to get a regular language log going despite previous failures.

The thing about previous failures is that they sometimes turn out to be learning experiences in hindsight, once you’ve figured out to do the thing you previously failed out. That’s exactly what happened to me with time tracking.

I’ve wanted to track my language learning time forever, but I just could never figure out a method that worked for me. Now, I’ve been able to find enough little tricks to make it just enough easier that I actually manage do it.

This is just a long winded way of saying: here is my latest attempt at a language diary… now with stats!

German with a side of German

These last three weeks have been all about German. Moving to Austria was a big kick in the butt to focus once more on my first, best, and favorite target language. As German is now my primary target language, Italian has accordingly been moved to the back burner. Spanish is still on hold (i.e., I’m not working on it at all).

When you look at my data for the past week, it’s clear that German was my priority. Between last Wednesday and this Tuesday, I logged nearly 26 hours of German and just two and a half hours of Italian. There are 6 minutes of Croatian in there, too (the Drops app). I’m kind of dabbling it, but not with much focus. The idea is just to get a bit familiar with the sounds and learn a few words now in preparation for learning it for real sometime in the next few years.

Most of my German hours are from lessons — my intensive course, which is 3 hours a day every weekday. I’ve also upped my German podcast intake and started reading a book (Eine Geschichte der Welt in 100 Mikroorganismen by Florian Freistetter and Helmut Jungwirth) and deprioritized Italian comprehensible input accordingly.

I think it’s going to be all German German German for a while here until I feel like there’s no language barrier between me and all these Austrians I so desperately want to like me.

Honestly I’m good enough right now to get by socially, and if I were at this level in Italian I’d have moved on to another language already. But there’s still a lot of work to be done before my conversations in German are as seamless as I expect them to be given that I’ll be living in this country hopefully for the rest of my life.

Yes, I’ve been slacking on my Speakly. For both German and Italian. What can I say, I’ve been so drowned in stupid little phone tasks thanks to all the bureaucracy I need to deal with for the move to Austria that I just don’t want to spend any additional time looking at the little screen. 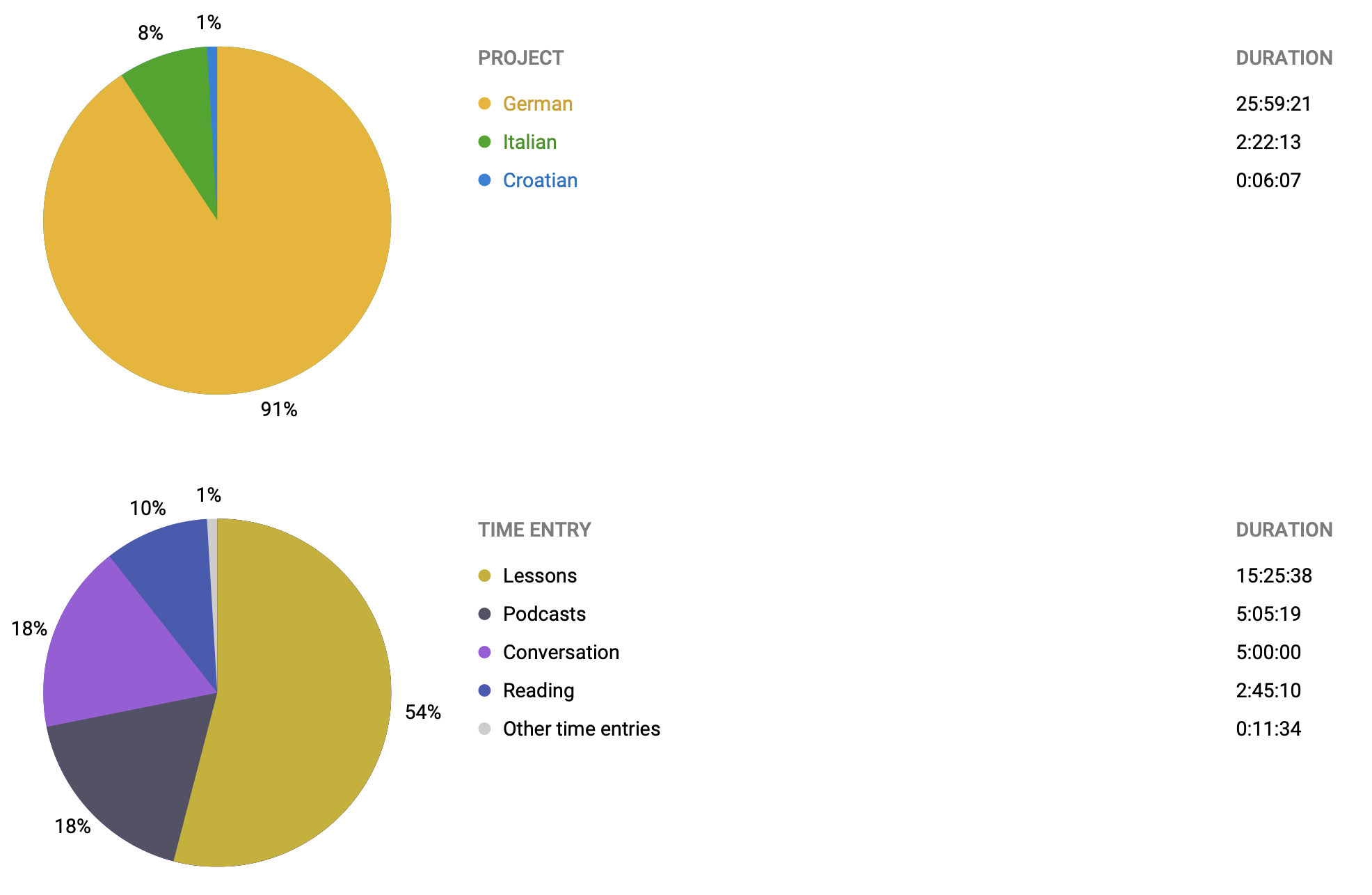 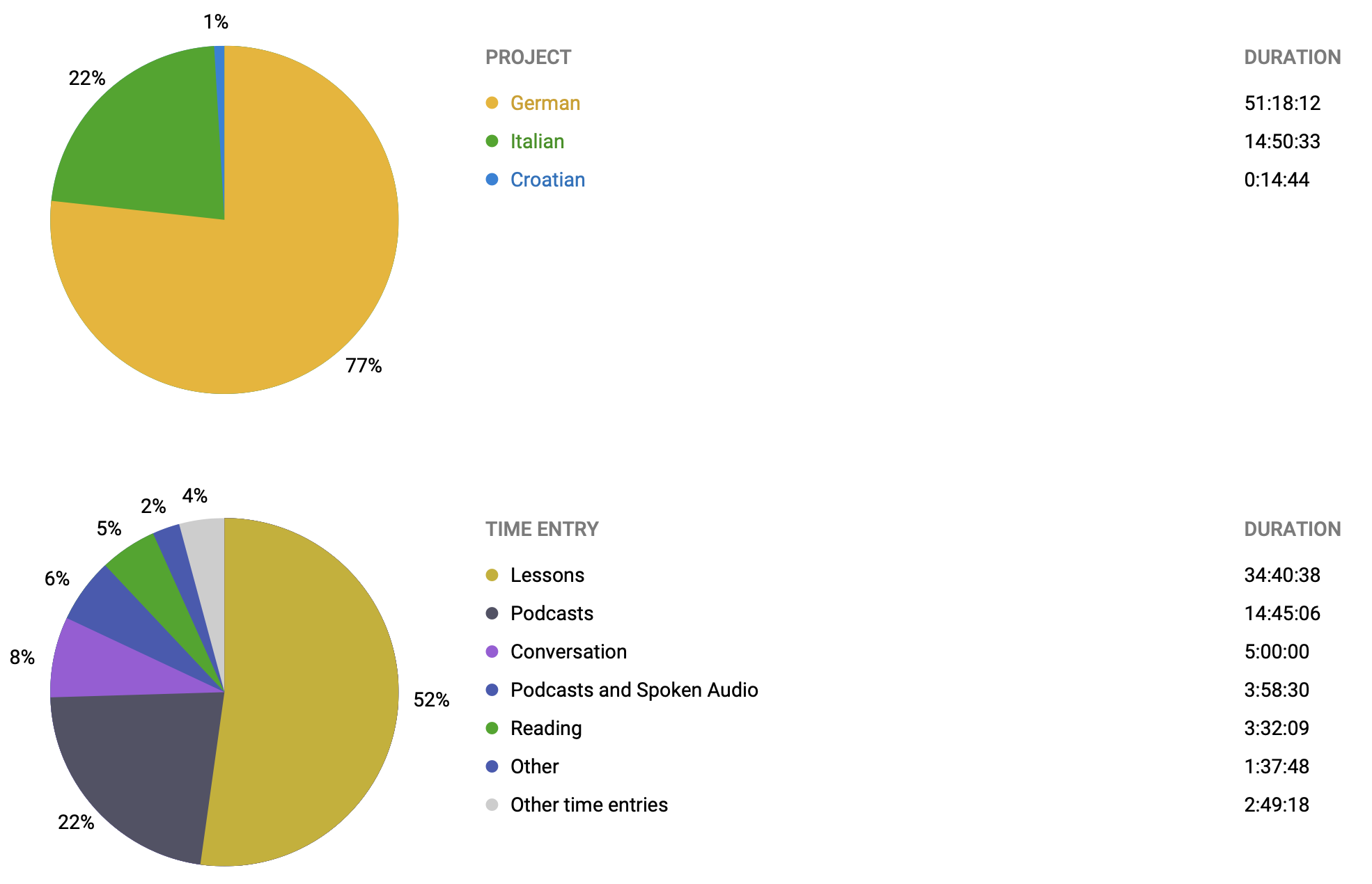 As you can see in the data, I narrowed my focus to German a bit more narrowly as the month progressed. This week is much more German-heavy than the rest of September was.

What’s the point of time tracking?

After many, many failed attempts at time tracking, I finally got it working. As a chronically chaotic individual, it took a combination of iOS shortcuts and intentional choices about what’s on my phone screen to lower the activation barrier for language tracking enough that I’d actually do it.

Long story short, you can set up iOS shortcuts to automatically start and stop Toggl trackers when you open and close certain apps. It’s also possible to add fancy dropdown menus and such to select languages.

So anyways, now I have pie charts. Yay! What’s the point?

Well, right now I don’t think they’re particularly illuminating. I’m not following my normal learning method at the moment so they don’t tell me much about how I usually learn. But I think that, in general, there’s much to be gained by using time tracking as a language learner — especially as a self-taught one.

Language learning is a weird and nebulous process that scientists still don’t really understand. Setting specific outcome-based goals like “correctly use 80% of German irregular verbs” just isn’t practical and doesn’t play nice with the meandering paths our brains often take when acquiring a new language. Time-based goals, on the other hand, are a great fit for language learning and time tracking facilitates setting and measuring these goals.

Time tracking doesn’t lie (unless you put in the data wrong). It shows you exactly how you’re prioritizing your target languages and other activities, if you track them. Especially for people learning many languages, it can be useful to understand how picking up additional languages eats into the time you spend on the ones you’re most eager to learn — or doesn’t.

This is ultimately the reason I want to time track. As someone who writes a language learning blog, I want to know exactly what I’m doing so I can recommend it to others if it works well (and write words of warning if it doesn’t). I specifically want to know how much time I spend consuming comprehensible input since that’s the main way I learn. Time tracking makes it easier to know what you’re doing and facilitates tweaking things if your method isn’t working well.

Learning primarily via input has tons of advantages, but easily measured progress is not one of them. It can be frustrating to feel like you’ve consumed tons of media but still can’t tell if you’ve improved at all in your target language. Time tracking makes your efforts to learn via comprehensible input measurable and lends a sense of achievement to what would otherwise just be listening to podcasts or reading books.

Do you track your language learning time? Or do you think it’s not worth the effort? I’m curious what you all think about this and whether you’ve found any helpful tricks to make tracking easier or more useful.

Drop your ideas in the comments below or, as always, simply shoot me email or DM to get in touch!

Until next (probably) week